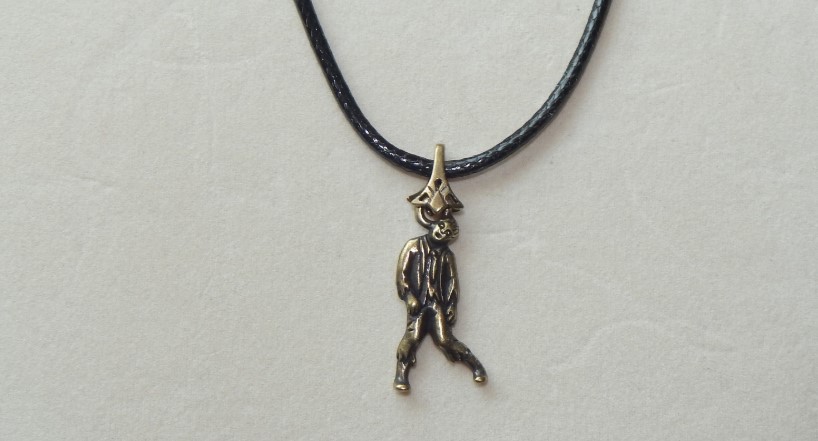 Choosing zombie costume ideas are important when Halloween is coming. The undead costume is surely going to make you the creepiest person in the party.

Here are some of the best zombie costume ideas to do on this special occasion. They can truly be your inspiration. 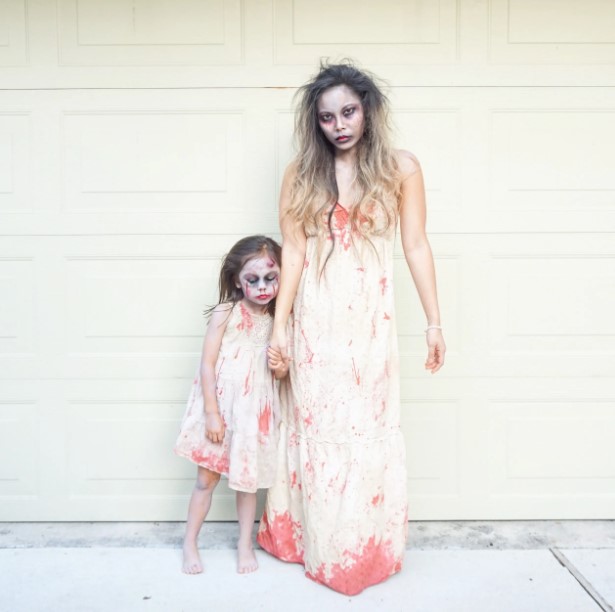 This mother and daughter zombie costume is great to make when you want to celebrate Halloween with your daughter. The costume is also easy to make as it is only using some old white gowns.

The gowns are ripped here and there and then stained with fake bloods. The makeup and hairdo will complement the bloody gown easily as well. 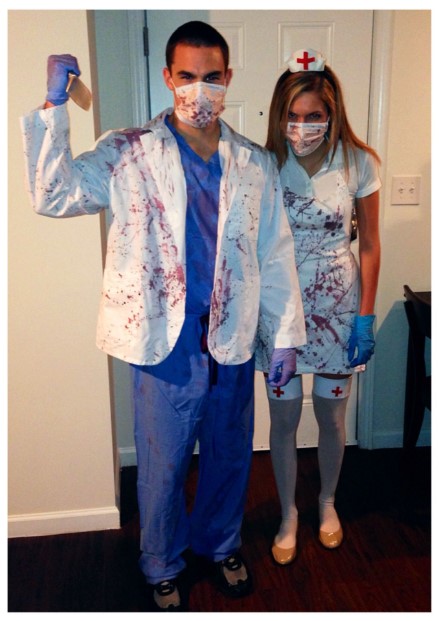 It is always common to find a couple dressing as doctor and nurse zombie. The zombie costume ideas can be made effortlessly, too. All you need to do is getting regular doctor and nurse costume and then stain it with fake blood.

In the picture, the doctor can be seen holding a fake knife and both of the undead are wearing face masks. It is a quite terrifying costume to scare anyone, though. 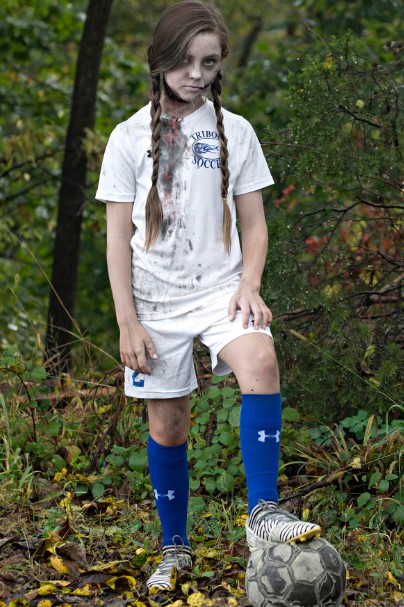 This costume is one of the best zombie costume ideas to do. A terrifying undead soccergirl is surely going to spook everyone easily.

The costume is just a simple soccer jersey, with the long sock and an old-looking soccerball. The makeup here is the on-point one. The undead girl looks incredibly scary with the pale, grey-ish makeup all over her face. 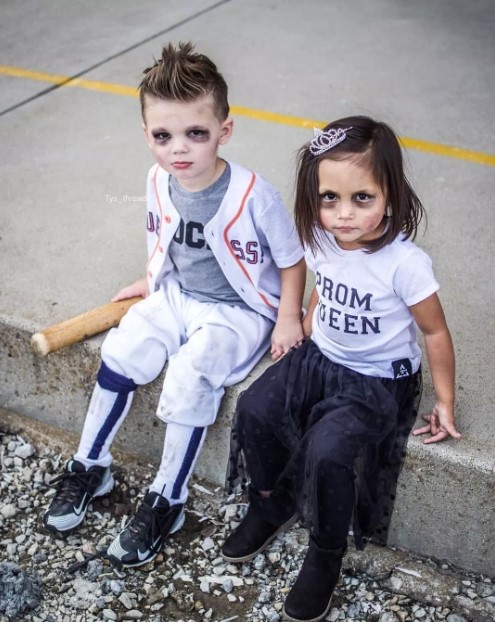 Zombie does not always have to be scary. They can also be cute and totally adorable. Take a look at the picture. It is an incredibly cute picture of kids zombie.

The wee zombies are dressed in simple outfits. The boy is wearing baseball uniform, along with the bat, and the girl is using simple shirt with a tutu underneath. The terrifying aspect here is their makeup. They both have spooky blackened eyes that will simply spook everyone. 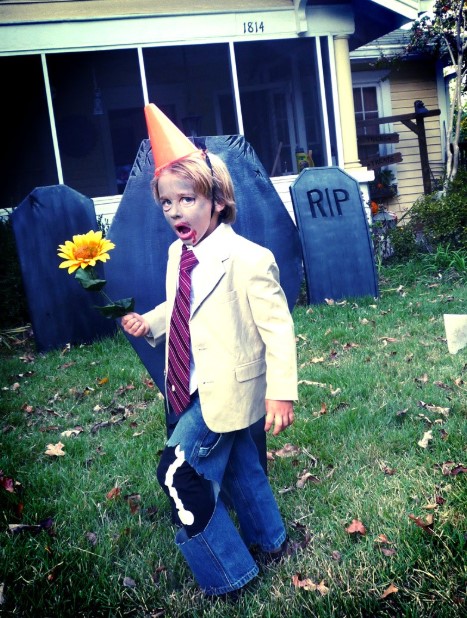 Talking about zombie, you cannot separate them from the infamous Plants vs. Zombies video game. The game is so popular to this day and dressing up like the zombie characters from the game is common zombie costume ideas.

The kid in the picture is dressing up like the road cone-head zombie from the game, along with the suit costume and the sunflower on his hands. It is such cute scenery to see, actually. 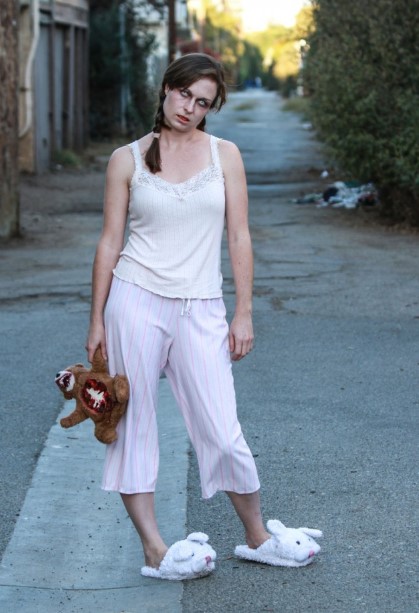 If you do not want to go all bloody and creepy for the zombie costume, you can try this simple sleepyhead zombie.

The girl is wearing a sleeping outfit and holding a teddy bear. The bear is ripped by the chest and has fangs, though. The zombie’s makeup is spot on with the pale look and the dead eye contact lenses. 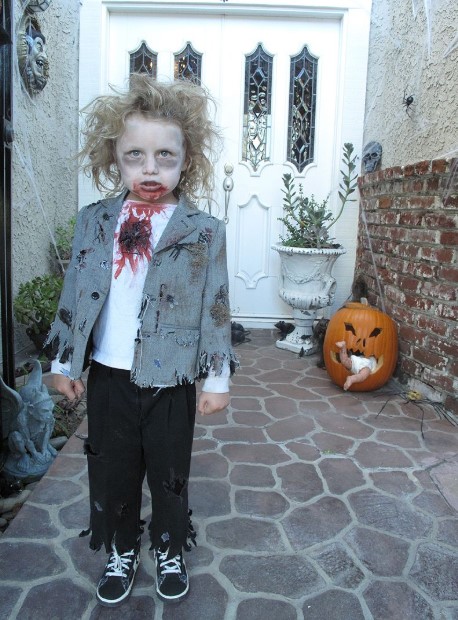 The boy in the picture is totally adorable and not spooky at all. He wears a suit and his hairdo is designed to be huge mess. His makeup is pale and grayish, which is perfect for any undead.

The ripped suit and the bloody mouth are paired with some bloody white shirt to enhance the zombie-ish look for the kid. He looks incredibly neat, though. 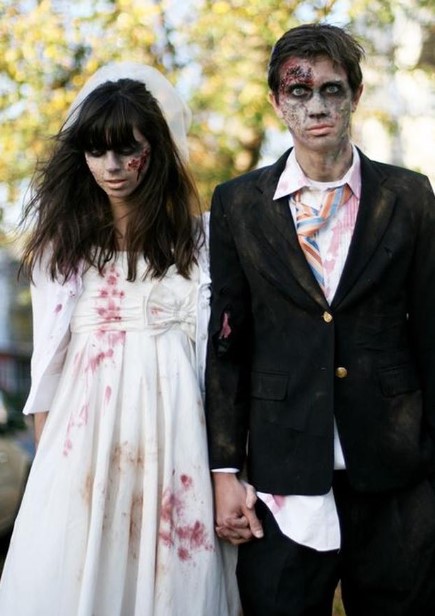 One of the best zombie costume ideas to choose when you go as couple is the undead bride and groom. The costume is so easy to get and so fun to do.

The bride, of course, needs to wear white dress and the groom wears suit. The outfits must be stained with lots of fake bloods, like the one in the picture. The makeup has to be convincing as well. It has to be terrifying for sure. 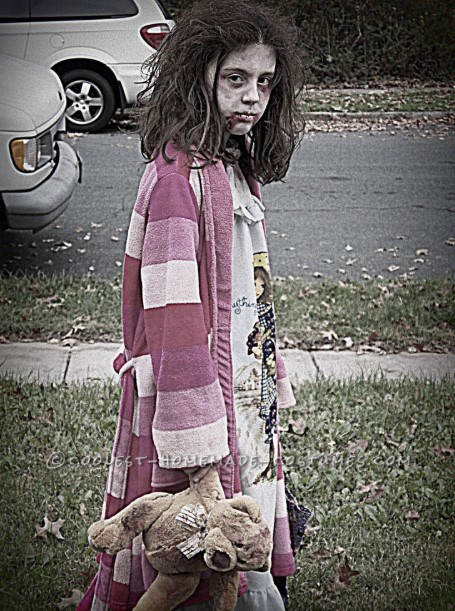 The zombie costume ideas in the picture can easily make anyone peed in their pants. It is a terrifying undead girl, straight from any apocalyptic movie. The girl is wearing a sleeping rope, carrying a teddy bear, and giving you a death stare.

The costume is not special, though, as it can be grabbed from any wardrobe. However, the makeup and the hairdo are the ones really helping here. They are so convincing and enhance the undead look of the girl. 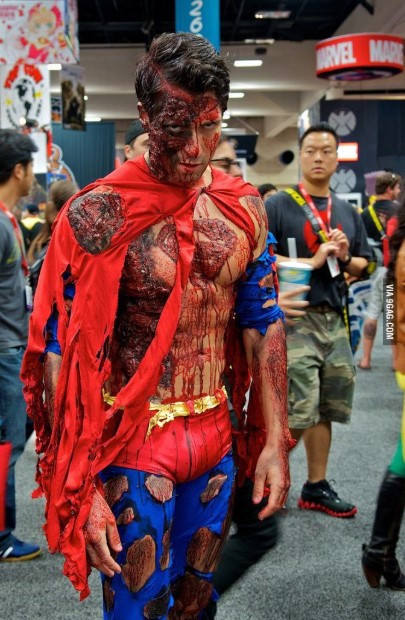 When you think that superhero cannot be creepy, just take a look at the picture. It is a picture of an undead Superman. He still has the full costume and the abs as well, but the costume is all ripped and bloody.

It is such zombie costume ideas to do, though, if you fancy superhero and zombie at the same time. Besides of that, this costume is the perfect one to show off your abs. 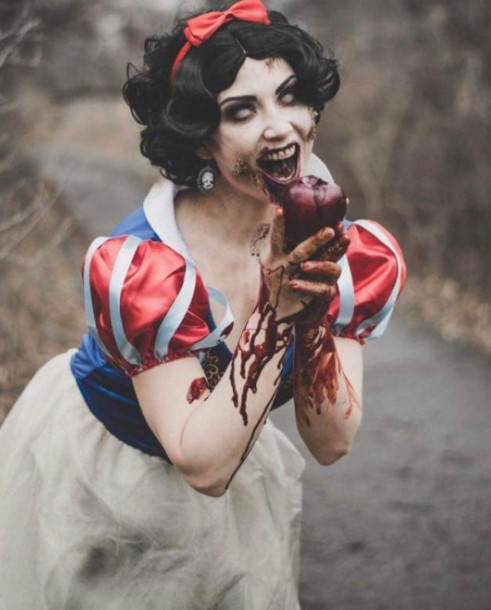 The boys can go as undead Superman, and probably the girls will choose this one. This is a Snow White zombie costume. The zombie costume ideas here are to make the pretty princess as creepy as possible.

The princess is holding a bloody apple. She has contact lenses on to make the eyes look dead. The mouth and hands are dripping with blood to increase the illusion of the bloody zombie trying to eat your soul. 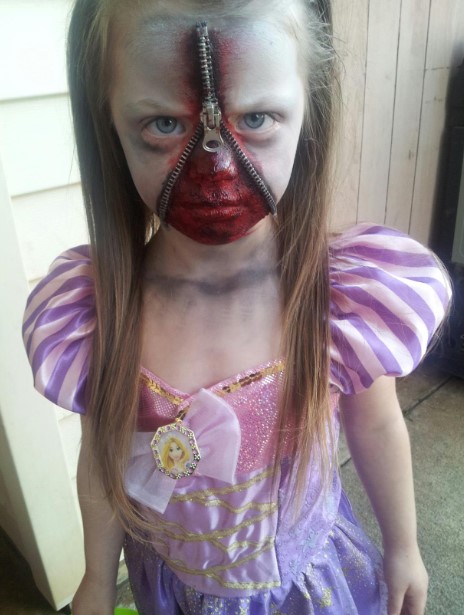 If you do not want to go all bloody and crazy for the costume, especially when it is for a kids’ costume, you can enhance the makeup instead of the costume.The girl in the picture above is the example.

She wears normal princess costume but the makeup is terrifying, really terrifying. The makeup is like she has her face ripped off in half. There is a zipper placed in the middle of the face, showing all the bloody inside. It is truly spooky indeed. 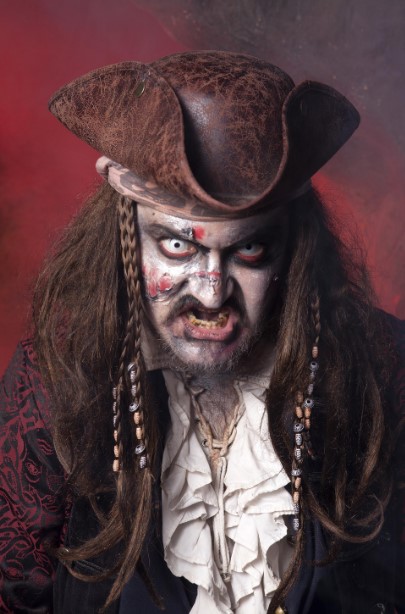 A lot of people love pirate zombie. This is why zombie costume ideas involving pirates are commonly found during Halloween, or Comic Con. The man in the picture is showing you how to rock a pirate-zombie-hybrid look.

The undead is wearing Jack Sparrow-inspired costume, with the signature hat and braids on the hair, too. The makeup is all grey and bloody. He uses dead-on contact lenses to enhance the overall look of the undead. 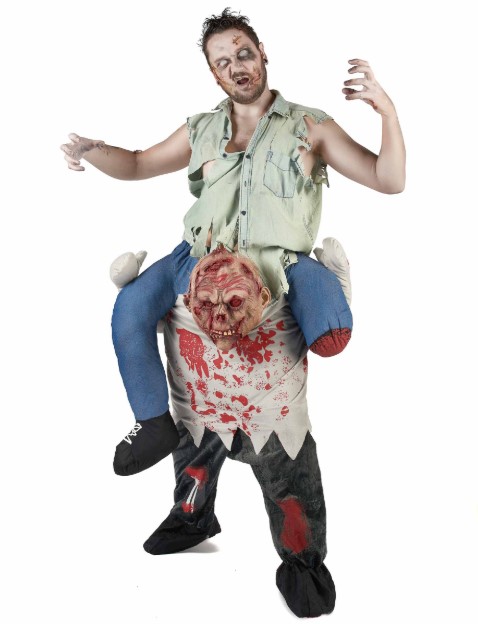 The carry me zombie costume is very fun to do. It is sold everywhere, too. The costume is basically going to make you look like you are being piggy backed by an undead.

All you need to do to complete the costume is wearing the spot-on makeup. Use pale, grey-looking, makeup to match the look on the face with the look of the creepy zombie carrying you up. 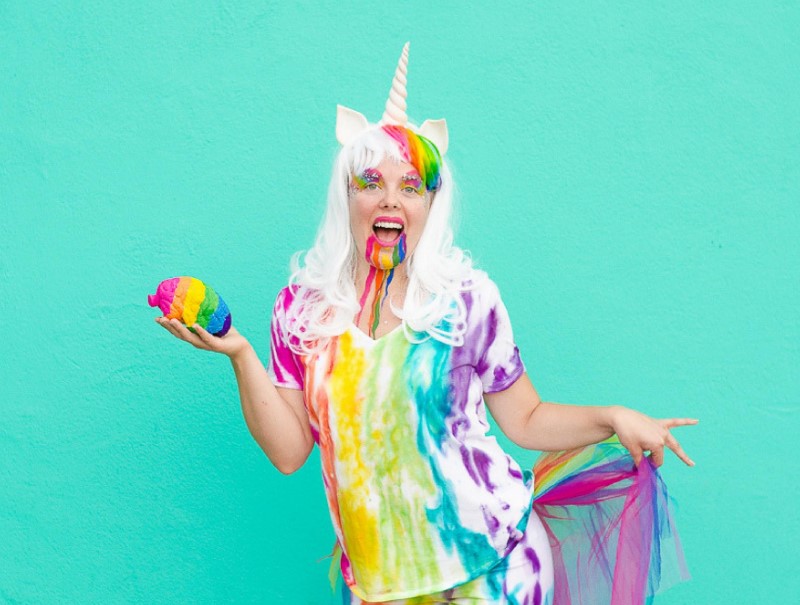 Combining unicorn and zombie is probably ridiculous. However, the result is awesome, though. Take a look at the picture. It is a girl zombie but with the rainbow of unicorn all over her face.

Instead of blood, the girl is covered in rainbow barf. She holds a ripped brain, too, but it is in the color of the rainbow. The costume is just a white shirt, white pants, and colorful fabric for the tail. The white outfits are stained with rainbow dyes to make it really colorful. 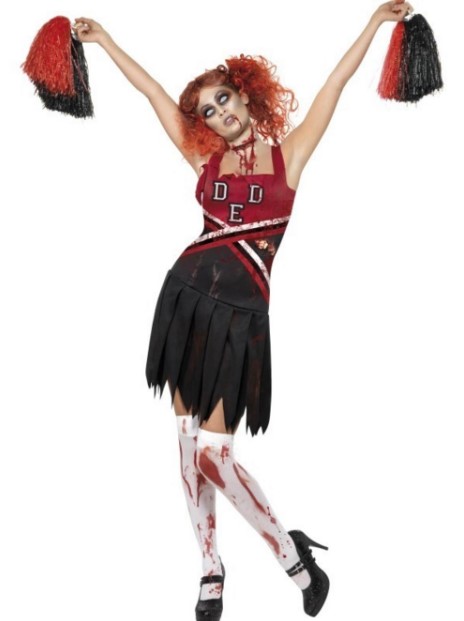 Cheerleader zombie is one of the most common zombie costume ideas to find these days. The costume is often chosen because it is so simple.

All you need to do is just a regular cheerleading outfit, along with the pompom. The outfit should be ripped a bit and stained with fake bloods. The hairdo and makeup should be the focal point here. The example in the picture showing a cheerleading girl with slit throat kind of makeup. 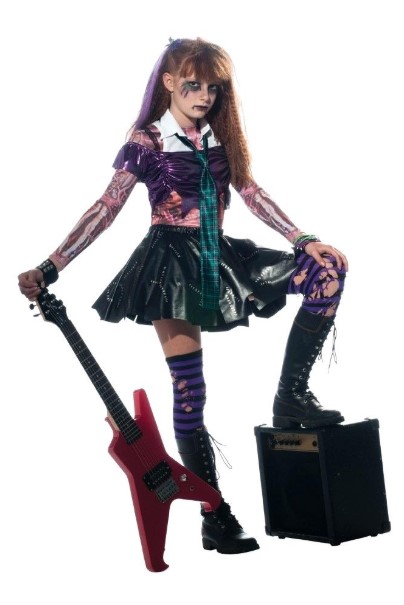 This is one of the best zombie costume ideas to do when you love rock music and zombie. In the picture, the zombie is showed wearing Avril-like outfit and holding a guitar.

It is just the spot-on costume to do to attract anyone’s attention as it is so stunning and awesome at the same time. 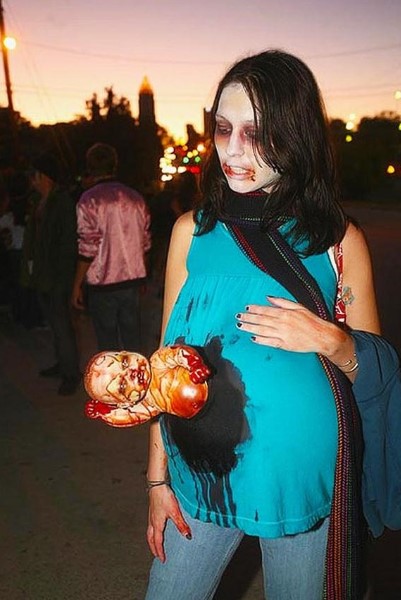 Pregnant zombie costume here in the picture is a bit gruesome. However, it is fun to do and probably perfect to scare everyone away.

The costume is a simple maternity shirt but with fake stomach and fake zombie baby popping out of the stomach. It is totally terrifying, though, to look at. 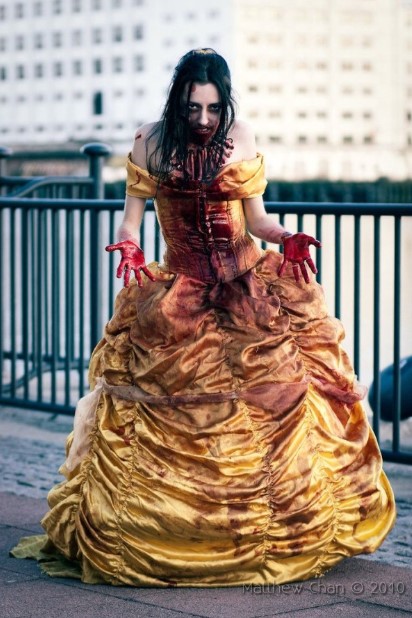 If you do not want to go basic on the zombie costume, take it to another level by dressing up as a princess zombie. The zombie is still a princess, though so that she has to wear big dress.

The dress here is totally drenched in blood. The hairdo and the makeup of the princess are also spooky and bloody, far from the pretty face you usually see on a royal princess. 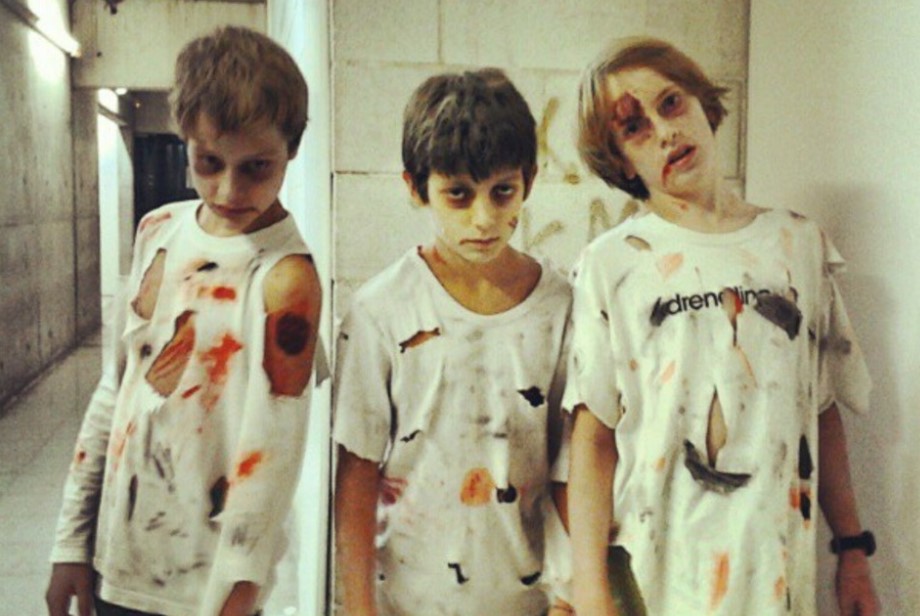 The last zombie costume ideas here can be the simplest ones. It is just a group of boys wearing ripped shirt and terrifying makeup.

This is such a great last-minute costume to make. It helps you when you have lots of unused shirts at home.

Those are some of the best zombie costume ideas to do. You can choose the one you like that you want to wear on Halloween.