Wall Texture Types that Will Beautify Your Home without the Wallpaper 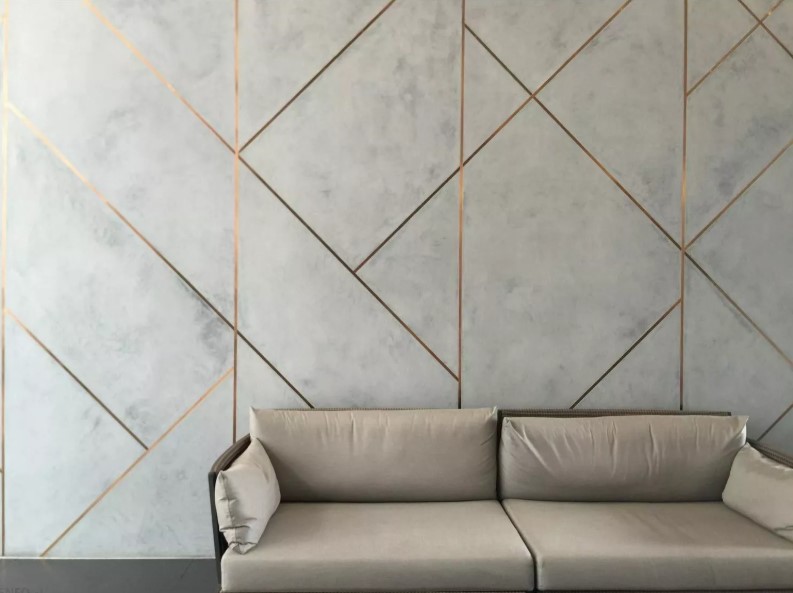 As we know, interior decoration cannot be separated from the wall and wall texture types. There are many kinds of types for these textures, and each home can have different textures. These can depend on the tools to make the texture and technique in applying wall finishing.

These kinds of textures can only be found in the houses that do not use tiles for the wall. Since it does not use the tiles, the surfaces of wall are done by using certain tools and techniques. Well, actually it leaves the nice trace of texture.

Plenty of texture can be found and each of them has nice beauty. Moreover, they are made by hands. Although they have the same name, sometimes the details of pattern and texture will be different. Somehow, it is like an authentic art in wall finishing.

The first reference of wall texture types is the knockdown wall. It is usually found in large area of house. Since it gets wide wall and ceiling, it needs specific technique that can be effective to add wall finishing quickly.

The texture is made by using knockdown technique. There can be sponge, trowel, and also brush to make the pattern. These tools are pressed on the wet plaster, so the texture can be different depending on the tool.

It is not made by using spray technique. However, it uses special brush to create the sheetrock effect. It does not leave the wall with smooth surface, but the technique creates nice texture lines with different lengths and boldness.

It seems this wall texture is clear based on the name. This also becomes the popular wall texture types. As its name, it uses brush to create the wall surface and the brush is slapped on the plaster.

The brush is stamped on the plaster after it gets rolled to give the density. Some people also call this as crow-foot texture since it likes the trace of crows when they are walking on the mud.

The next reference of wall texture types is the classical stucco swirl. It is one of the classic wall patterns or textures applied on the plaster.

In most of houses, this wall texture is found in the white color since in the old times, white was popular. Moreover, there was no various options color as what are found in recent days.

These are usually found in bedroom. However, there are also bathrooms using this wall texture. This uses specific tool, so there can be similar pattern in the same size.

Then, the next wall texture imitates the texture of tree. It takes the design of tree bark and it looks great. Somehow, it looks like the pattern from wallpaper instead of the handmade pattern.

It is made by using roller. Well, it is the heavy type of roller, so it can give strong traces of pattern as what is found in the three barks.

These are usually applied both on the wall and ceiling. However, the ceiling gets more portion of this wall texture since this area is easier to reach by using heavy roller.

It is the other idea of wall texture types. As its name, it takes the pattern of popcorn when it is seen from above. However, it gets smaller details instead of large or big blocks of popcorn.

It is made by using the sprayer. However, it needs good skills and technique. That’s why now, it is not common to find the popcorn styles of wall texture in many houses.

The sand texture is one of the wall texture types that have similar look to popcorn style. It also has similar technique to create the pattern. However, it has different depth.

Because of the difference in depth, it tends to look like sand texture instead of popcorn pattern. Moreover, this involves easier skills and tasks to do. The texture itself is added on the soft surface, so it is actually added and this is done by spraying.

On the previous point, there is stucco swirl. This may have swirl, but it is different from this section. It has larger and bigger swirl and it looks great. In its process, it also has different technique to make the texture.

It uses brush or sponge in order to create the pattern. Then, some houses have the full circle of swirl, but there are also some houses that only take a half circle of swirl. Compared to other texture, it is considered as the nicest option.

This is called as plain texture since it does not have specific texture on wall finishing. Some people also consider this as the solution once the sand or popcorn technique does not work well in creating the pattern.

This is one of the easy wall texture types. It can be applied in most of the room and it will not take long duration to make it. It only needs to soften the surface by using plaster. It will leave the wall with no pattern or texture.

The next option of wall texture types is the lace texture. It looks good for most of houses and it can be applied both for ceiling and wall. The thing that makes this texture special is the technique.

The texture involves two types of colors. In other words, the wall surface already gets color, but it does not have the texture. Once the surface is dried, the lace texture is added by using different color. Of course, it is still possible to have the same tone of color, but it will not create good lace texture.

This is one of the beautiful wall texture types. It is not kind of type that can be made easily because it has two tone of color. It will involve long steps but the results will be nice.

The main attractive point is not found in the texture of surface, but it is more about the texture of color. A specked texture or pattern is made. It is actually random pattern, but it has consistency in term of color and size of dots.

For the beautiful pattern with great detail, fish scale texture is good reference to choose. This pattern shows the name. It imitates the skins of fish. Of course, it looks beautiful, but involves high level of skills and technique to create the pattern.

This is not type of random pattern with different sizes of shape or pattern. It has consistency in term of size and shape. Moreover, it gives great details with arranged scales.

Of course, it is recommended to hire professionals to make the pattern. When it is not done by skilled person, the pattern cannot imitate the pattern of fish scale well. Even, the result can be awful.

For those who love bold ceiling texture types, this is good reference to choose. This imitates the concept of cave ceiling that has the rugged surface of mounted part. These patterns look like the rocks mounted from ceiling.

For those who love bold character of design, it may look great. It is like installing small rocks on ceiling, but it is not as what it looks like. In fact, it is still the composition of plaster and concrete to create the form.

The good thing is not only the rugged surface. When it gets lighting, it will give unique pattern of shadow reflected on the wall. That’s why it is perfect for ceiling. Moreover, its rugged surface may make the skins scratched when it is for the wall.

If you love beauty and details, you can check this pattern. It gives beautiful lace pattern on the surface of wall. However, it also becomes the most difficult pattern, even when it is compared to fish scale texture.

In creating the texture, it is like drawing lace pattern on the wall. That’s why it requires good skills, and hiring professional is advised. Although it is more suitable for ceiling, applying the laces on some part of wall is also great.

Well, those are some great wall textures to choose. Each person may have different preference. It is because the texture is about taste. There are also some styles that have beautiful details and arts. However, these require good skills. Of course, each of these wall texture types has different level of difficulties, but they are worth to get.

Make Your House Cosy and Functional with These Tips

Make It Yours: Essential Tips When Styling Your Houston…