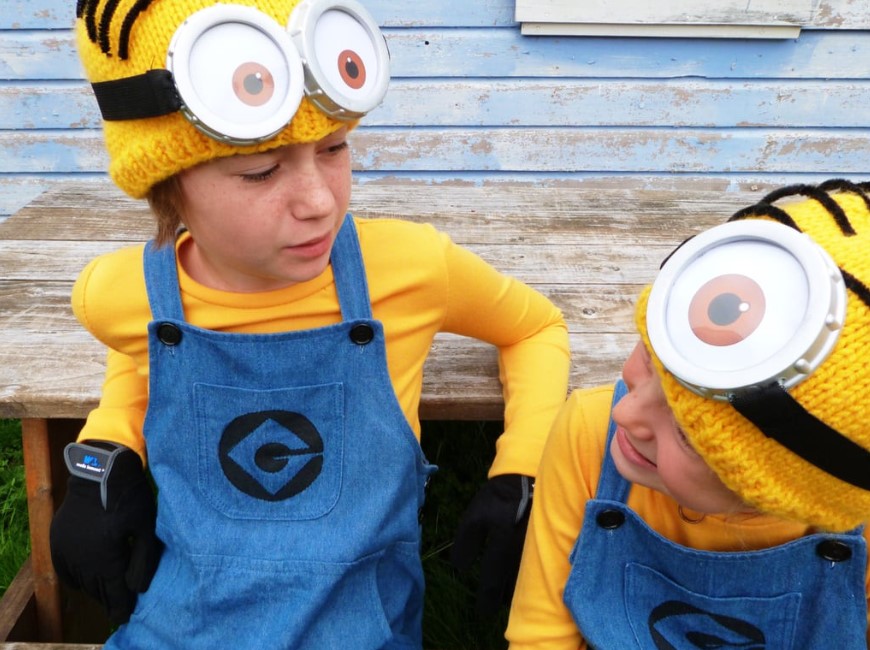 DIY Minion costume is often sought by those who want to celebrate Halloween as the yellow, cute characters from Despicable Me movie franchise.

For those who still have no idea how to rock DIY Minion costume, here are some inspirations for you to read. 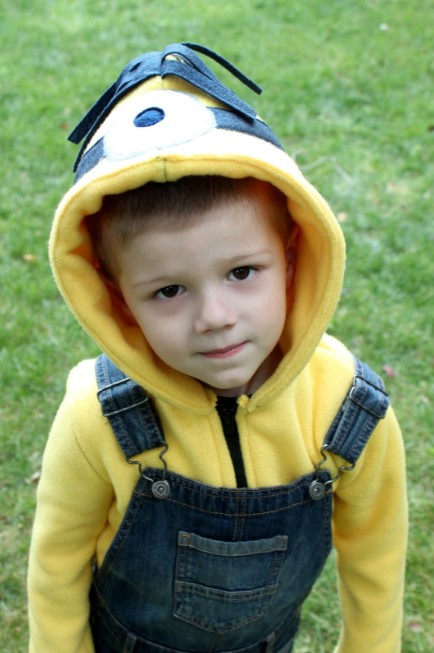 When you have to make DIY Minion costume as soon as possible, you can do it fast using yellow hoodie. If your boy has the exact hoodie, all you need to do is make him wearing it and then pair it with a denim overall.

In the picture, the little boy is using the yellow hoodie and denim overall and immediately resembles a Minion. The top of the hoodie is accessorized with black felt strips and a round eye to make it looks even more like Minions.

A lot of people do not want to go complicated when it comes to the Minion outfit. The simplest costume using the character’s theme is probably the one in the picture.

A yellow T-shirt is printed with a Minion face on it. The shirt is simply worn, paired with long denim, and then a yellow beanie with a few black sticks is worn on the head. 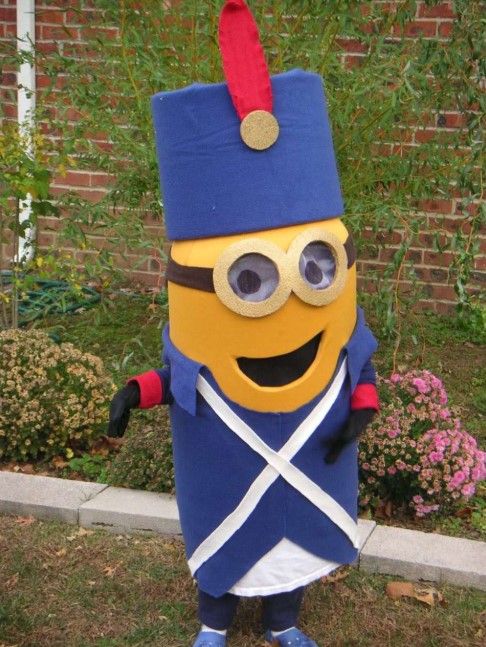 When the Minion costume is about to be used as mascot, you need to go big. The costume must be big and bold, like the one in the picture.

The full DIY Minion costume shown here is made out of cardboard, foam, and felt. It looks like cylindrical Minion going to parade and it looks totally adorable. 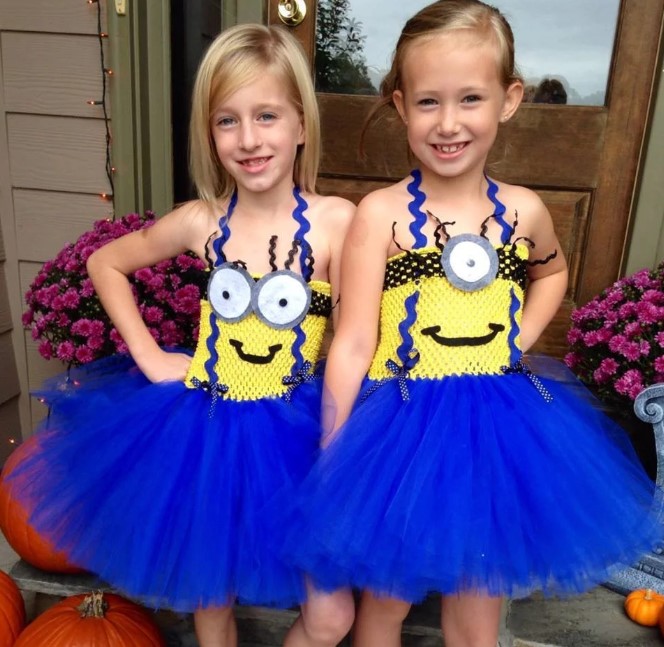 For little girls who love Minion as well as love being a ballerina, this is the best costume you can get them. This is the costume of Minions but with cute twists. Instead of denim overall, the costume is using fluffy tutu.

The blue tutu is attached on a knitted top. The top has Minion’s signature look with the large goggle eyes and the cheeky smile. This is the cutest, most adorable costume you can make. 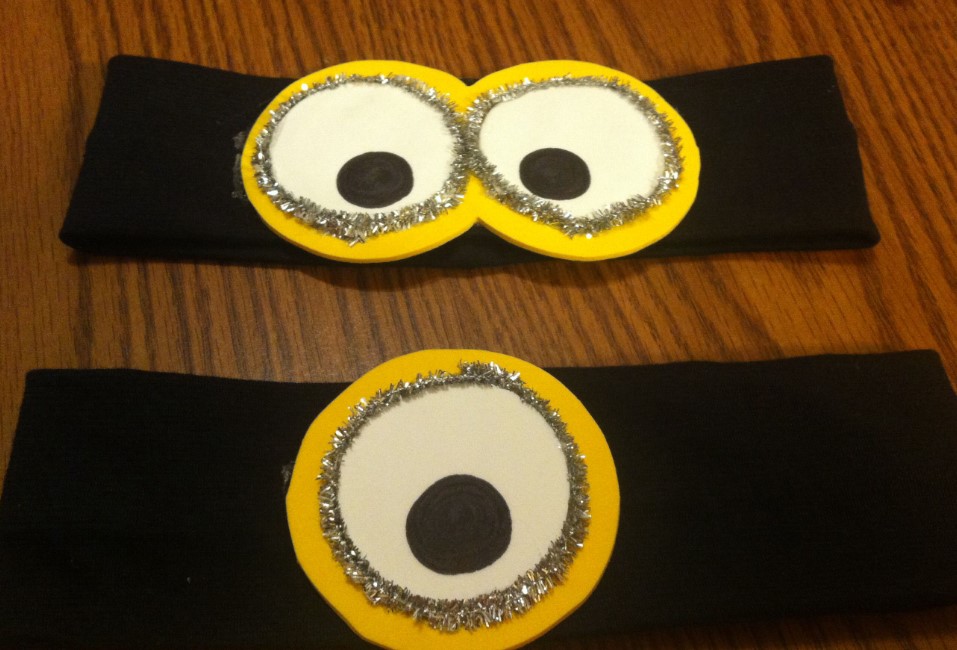 The costume using the theme of Minion does not have to go big. Sometimes, it can be as simple as possible. You do not have to wear the yellow and blue outfit. Instead, you can just use the headband.

These headbands in the picture are clearly looking like Minions. They are very easy to make. All you need to do is just cutting some circles out of yellow, white, and black felts and then glue them to a black headband. 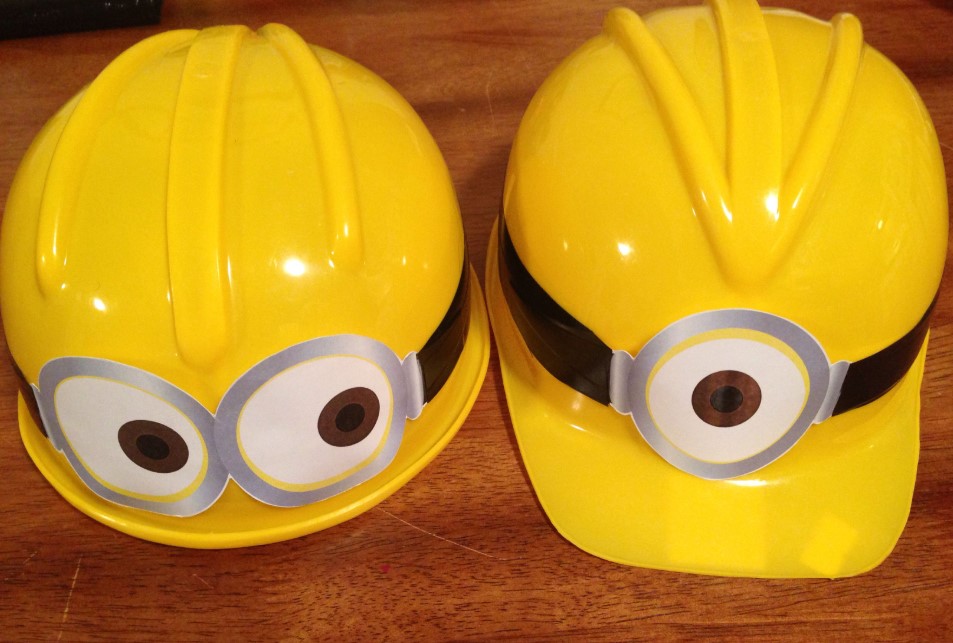 If you happen to have some hard hats at home, you can make Minion accessories out of them. You can do it fast and easy, in no time at all. The hard hats are mostly yellow, which is the color of the Minions.

The yellow hard hats are decorated with Minions goggles. The templates are everywhere on the internet that you can get it with ease. The hard hat then can be worn to support the DIY Minion costume. 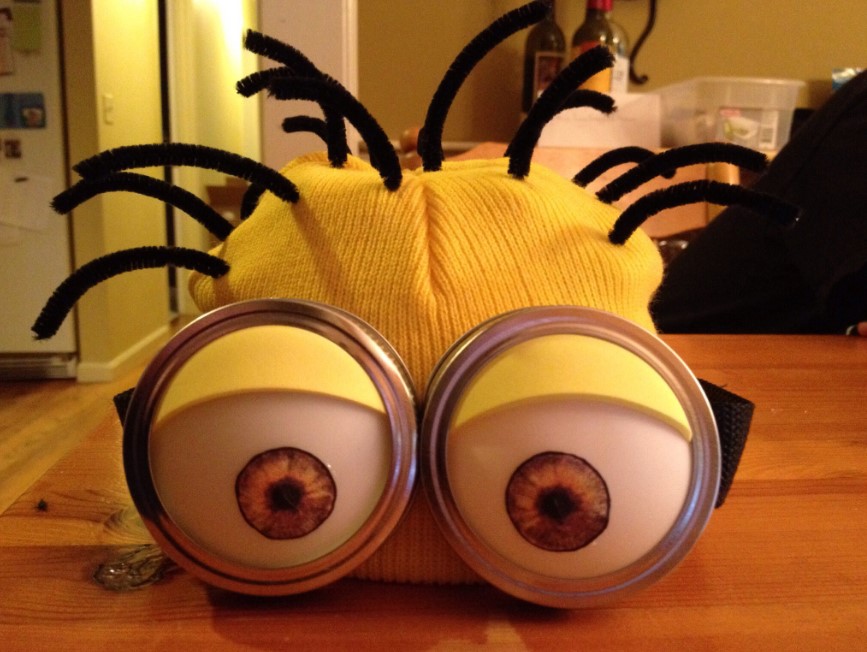 If you do not have any hard hats, however, the Minion hat can also be made out of something else. The picture shows you a creative DIY Minion hat out of yellow beanie, some decorative sticks, and a pair of goggles.

The most interesting part here is the goggles because you can easily tell that they are made out of old Mason Jar lid. It is indeed creative and worth wearing on special occasions, like Halloween, for sure.

Crochet is the best technique to get DIY costume of any theme. If you have good skill in crochet, you can make minion hat for baby. Babies love crochet costume because they tend to be softer and warmer to wear.

The adorable baby in the picture is wearing a crochet Minion hat, a yellow shirt, and a denim overall with the Gru logo on the chest. The final look of the DIY Minion costume is totally whimsical and fun. 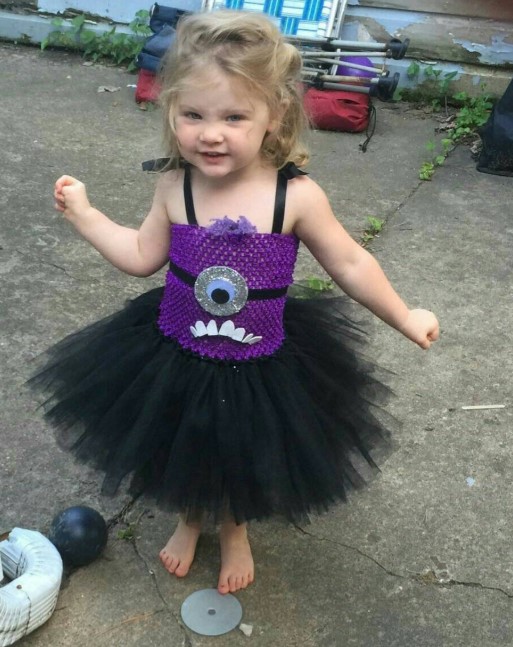 Still about crochet, you do not have to stick with hats, though. If you can do crochet so well, make a top instead of a hat. The example is in the picture. The girl is wearing evil Minion costume with crochet top.

The top is then connected to a large, tutu skirt in black color. The face of the evil Minion on the top is made out of felt fabric cuts, including the hideous teeth for the character. 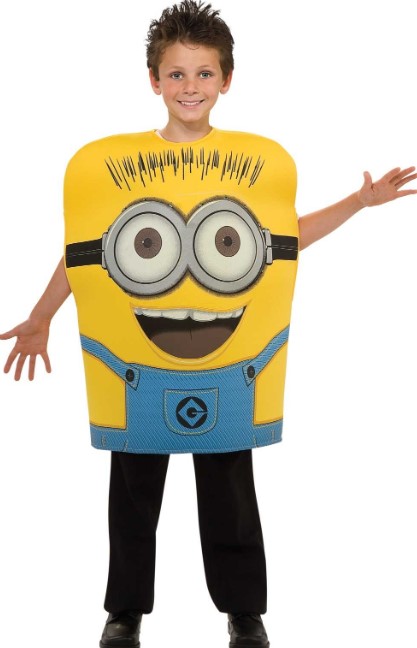 Sometimes, making detailed costume for Halloween takes more time than you would have thought. That is why for those who want to keep everything simple, wearable cutout costume like in the picture is more preferred.

The boy in the picture is wearing cutout Minion attire. It can be made with ease, using large cardboard or large stiff fabric. The Minion face can be manually painted or printed, using templates available around the internet.

When you have a yellow jumper and denim overall, you can make the Minion costume as fast as possible. Basically, the characters are wearing those two items all the time, making it easy for people to copy them.

Take a look at the picture, the girl is wearing yellow jumper with hoodie paired with a mini denim overall. To enhance the Minion looks, she sticks Gru logo on the denim, wears goggles, and black boots.

The denim overall on most DIY Minion costume can be replaced with tutu. A lot of people think tutu is adorable and it is indeed true. Tutus are not just for little girls, women can rock the skirts, too.

The clear example is shown in the picture. The woman in the picture is wearing simple Minion outfit with bright blue tutu underneath. The tutu is matched with simple yellow shirt that has Gru logo on the chest. 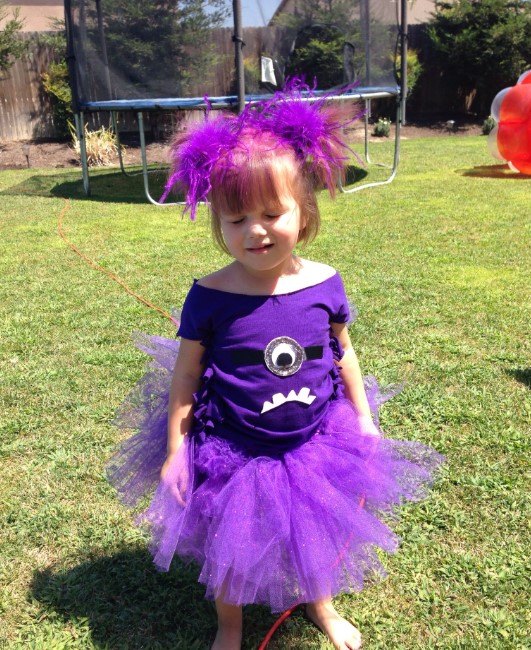 Still about tutu, the ballerina skirt can also be used to make evil Minion outfit. The DIY Minion costume is so adorable, as you can see in the picture.

The little girl is wearing little purple shirt paired with purple tutu. The headband is decorated with purple furs to resemble the crazy look of an evil Minion. 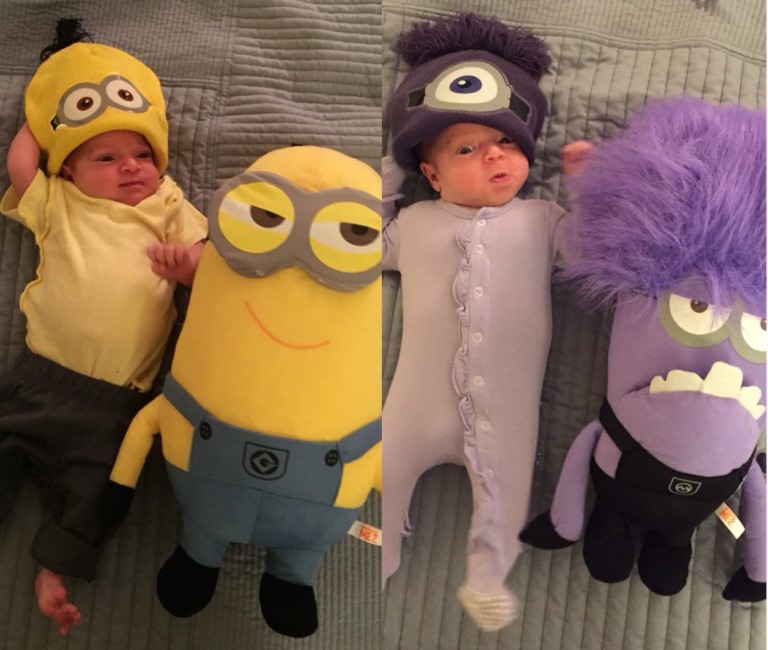 When it is a baby you are about to dress as a Minion, you need to get as simple as possible. The outfit can be just ordinary but the hats should rock.

The baby in the picture is wearing Minion and Evil Minion outfits. He wears regular onesies but the knitted hats are the ones making him looks like the character. 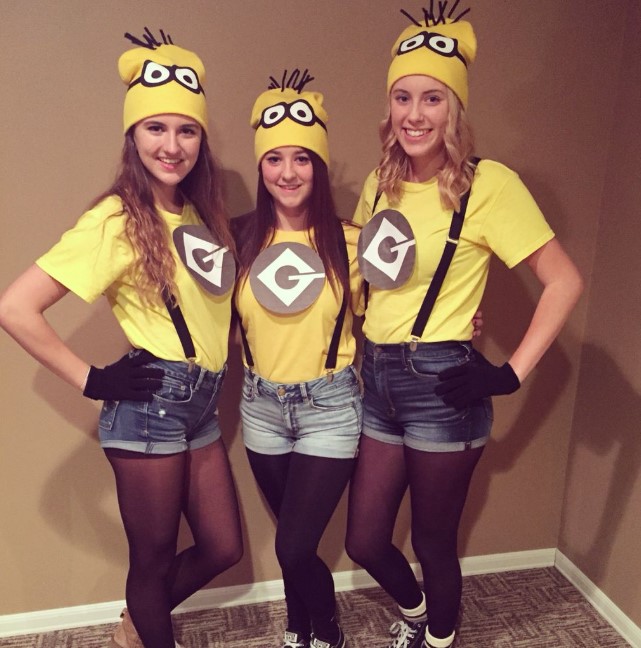 The simplest Minion apparel is probably to wear a yellow shirt and a pair of short denim. Then, wear a suspender and a beanie hat decorated with Minion face on it.

The overall look of the costume can be seen in the picture. It looks stunning and pretty. The costume also takes no time at all to make. 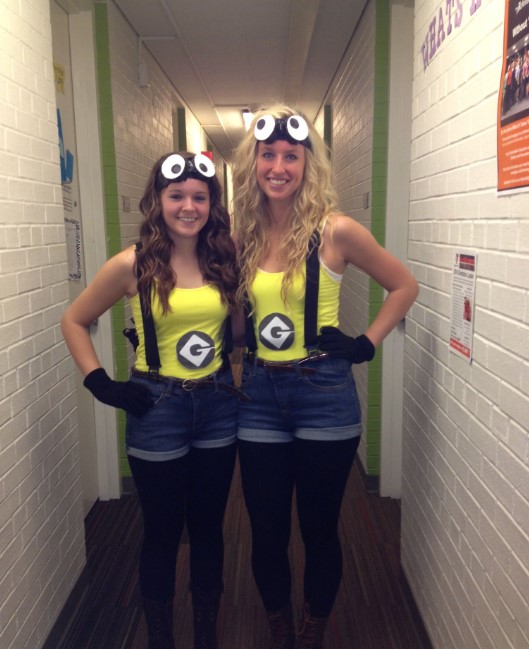 To look sexy even in DIY Minion costume, you can wear tank top and short denim. Pair them with black stockings and DIY goggle headband.

To make it more appealing, wear some suspenders and boots. The girls in the picture look totally sexy and interesting in the costume. 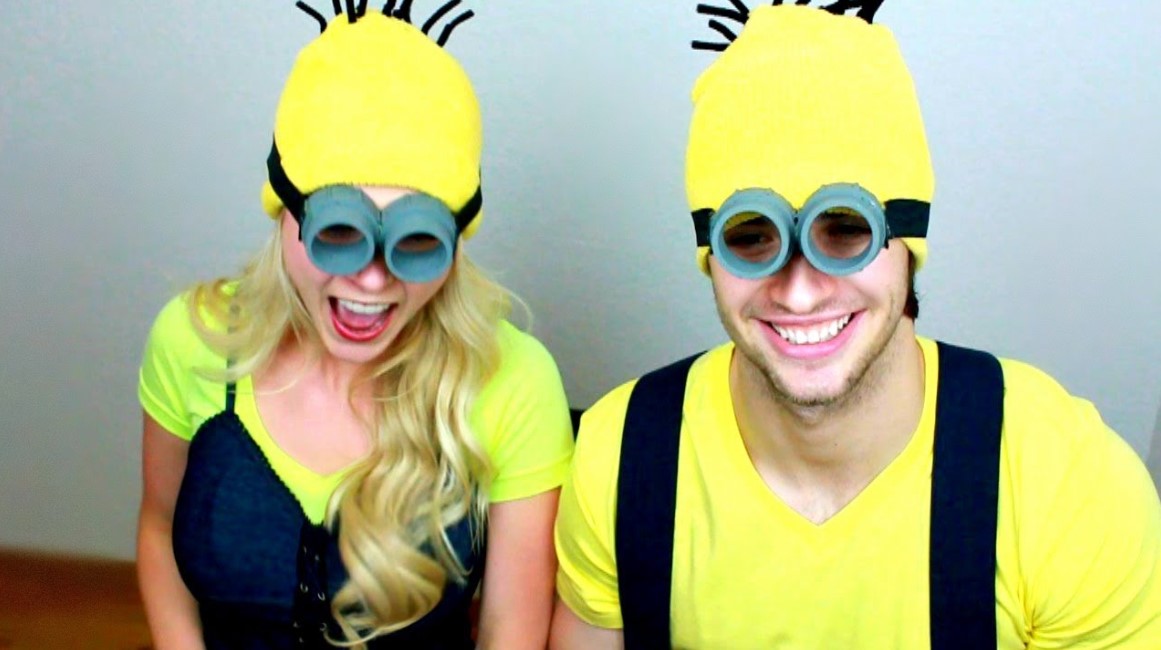 The yellow shirt and denim overall are available everywhere. The part that you will have to make on your own is probably the goggles and beanies.

Thankfully, Minions’ goggles and beanies can be made with ease. Add several decorative sticks on top of a yellow beanie. For the goggles, just add some hollow tubes on a elastic headband. Done! 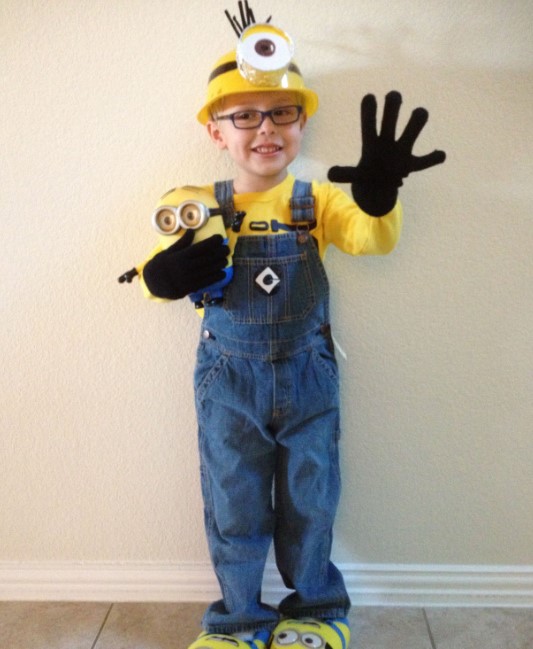 In the picture, the boy is wearing a full DIY Minion costume. He wears long-sleeved shirt, denim overall, and hard hat.

He also wears black gloves and even some Minion slippers. The final look of the boy is totally adorable. He will be the star of any Halloween party to come. 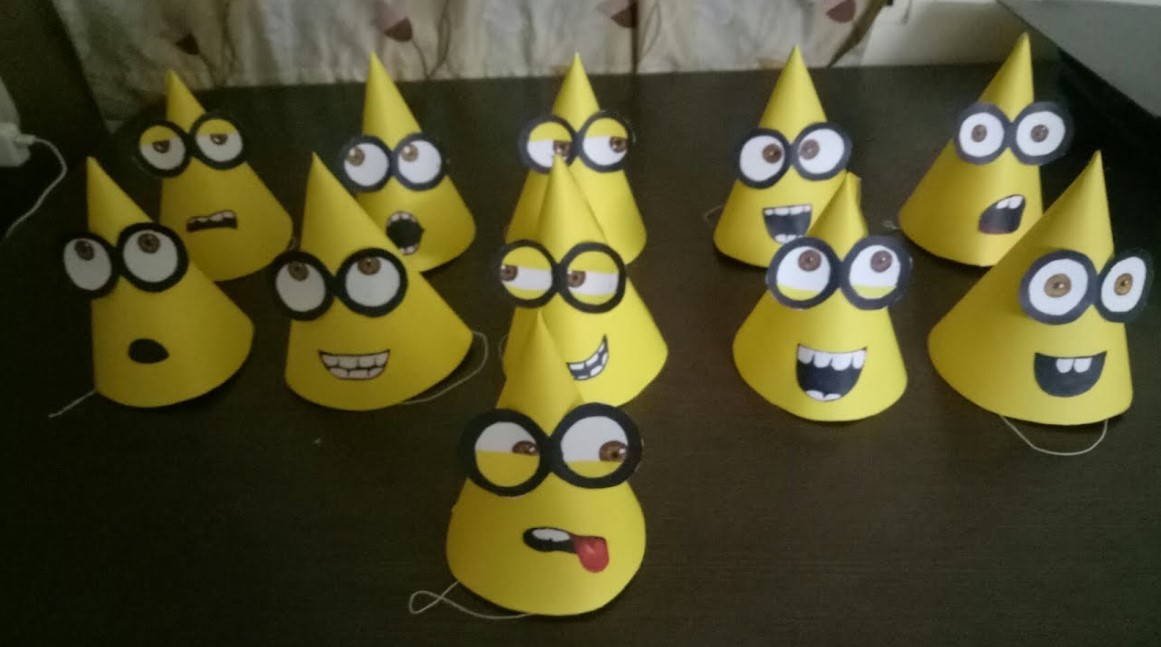 When you want Minion-themed accessories for party, you can do with these party hats idea. It is not technically a costume but they are still wearable.

The hats are incredibly easy to make as they are just in the shape of yellow cones decorated with printed Minion faces. 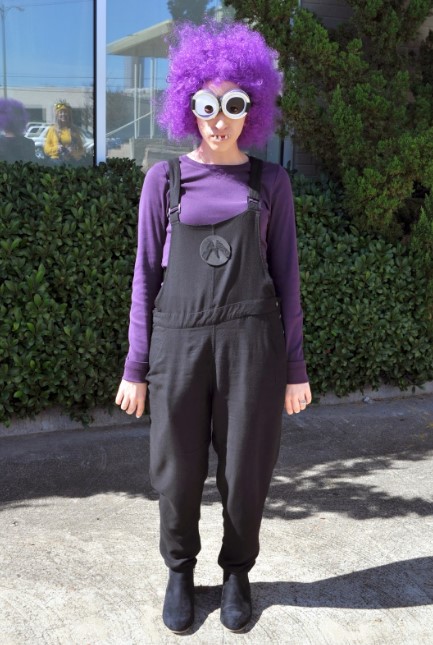 The last costume here is the simple Evil Minion one. Instead of yellow shirt, purple shirt should be worn. It has to be matched with black overall and crazy purple wig.

The example can be seen in the picture. It is great and fun to do if you do not want to go all yellow and bright for the occasions.

See? Some of the best DIY Minion costume ideas can be very simple. All you need to do is be creative and rock the costume on the occasion.

Ways to Add Storage Space on Your Garage

Great DIY Plant Stand Ideas for an Outdoor and…